By most accounts, mine included,  Rick Tocchet accumulated the most career Gordie Howe Hat Tricks of any player, including Stan Mikita.  Tocchet earned GHHTs with five different franchises, including nine with the Philadelphia Flyer.  Tocchet's best year for GHHTs 1986-87, when he had three GHHTs.  All 18 of Tocchet's GHHTs were during the regular season.  He averaged a GHHT every 64 games but yet never got one during 143 play-off games.  For his career, Tocchet scored 440 goals, 952 points and 2972 PIM.  Tocchet was the quintessential power forward.  A player who could score, but who would also physically intimidate the opposing team, just like Goride Howe.

There were 20 GHHTs in 2008-09.  Corey Perry was the only player to have more than one.  Perry had one in the regular season, and one during the play-offs.  There were three nights with two GHHTs, twice by players in different games, and once by teammates.  The teammates were Luke Schenn and Jamal Mayers, who both got a GHHT in a losing cause for the Toronto Maple Leafs.  David Clarkson earned himself a GHHT and then a few weeks later was the fight opponent for Brent Seabrook`s GHHT.  Teams with GHHTs were 16-4, including 2-0 in the play-offs.

Keith Tkachuk was one of the premier power forwards during the 1990s.  Tkachuk led the league in goals in 1996-97 with 52.  He also accumulated 228 PIM; making him the the fourth, and so far, last player to have over 50 goals and 200 PIM in a single season.  Tkachuk had all of his 10 career GHHTs with the Winnipeg/Phoenix franchise.  In 1998-99 Tkachuk had three GHHTs, including one during the play-offs.  Twice, Tkachuk had his fight of his GHHT, immediately after assisting on a goal.  Once versus Jayson More, and then a few years later against Petr Svoboda. 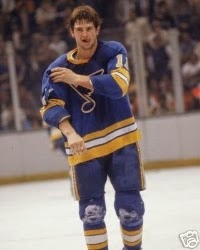 Posted by JGBlargh at 2:45 PM No comments:

There were 49 regular season Gordie Howe Hat Tricks plus another 13 during the play-offs in 1980-81.  Bob Bourne, Tim Higgins, Rick Middleton, Dave Taylor and Ryan Walter each had two during the regular season.  Rick Middleton was a finalist for the Lady Byng in 1980-81 and had a total of 16 PIM.  Tim Higgins had two in three games.  Dave Taylor had both of his against the Colorado Rockies.  Brian Sutter had two during the play-offs, both during a five game series against the Pittsburgh Penguins.  Ron Flockhart and Michel Galarneau scored their first career goal during their GHHT.  During the play-offs, on April 9, 1981, the Boston Bruins and Minnesota North Stars combined for three GHHTs, with Brad Maxwell and Bobby Smith of the Stars, along with Brad Park of the Bruins notching GHHTs.  Park and Smith fought each other during the game.  It was the only time in 1980-81, players earning a GHHT had the fight against each other in the same game.  In another play-off game, Michel Goulet and Peter Stastny both each had a natural GHHT during the third period.  In that game, the Quebec Nordiques beat the Philadelphia Flyers 2-0. The Detroit Red Wings were the only team without a GHHT, while the Buffalo Sabres and Vancouver Canucks were the only teams without a GHHT against them.  The record of teams with a GHHT was 47-12-3, for a .782 win percentage.

I researched the 1980-81 season using the hockey summary project, along with hockeyfights.com and dropyourgloves.com.  On some specific GHHTs, or non-GHHTs, I gather information via google searches.

Update:
Special thanks to trottiertobossy and Eric Hornick for helping me research a potential GHHT by Dennis Potvin.  On December 16/1980, an altercation occurred between Denis Potvin and Tim Trimper.  It was listed as a fight by Hockeyfights.com but Trimper was noted as not receiving a fighting major.  Any newspaper articles I found on the game didn't mention the actual penalties.  I had already removed 2 GHHTs when researching altercations between two players where one doesn't receive a major and this one became the third.  trottiertobossy posted a fan's scorecard from the game that lists Potvin's major as a butt-ending major.
Posted by JGBlargh at 11:05 PM No comments:

When career leaders of the Gordie Howe Hat Trick are being discussed, Brendan Shanahan's name always comes up.  For a while, he was believed to be the career leader in GHHTs.  While he's no longer believed to be the leader, it's believed to be either Rick Tocchet or Stan Mikita depending on the source, Shanahan is among the top three with 17 career GHHTs. For his career, Shanahan scored 656 goals, 1354 points, and 2489 PIM.  He has the third highest PIM out of any player in the HHOF.  Shanahan won three Stanley Cups and an Olympic gold medal during his career. He was elected to the HHOF in 2013.

Posted by JGBlargh at 1:34 AM No comments:

There were 18 Gordie Howe Hat Tricks in 2009-10.  Leading the league was Chris Stewart, who was the only player to score multiple GHHTs.  The first GHHT went to enforcer Brain McGrattan and enforcer Chris Neil wrapped up the season with a GHHT.  Fedor Tyutin had a natural GHHT againsty the Ducks and Ryan Getzlaf.  The fight capped completed Tyutin's GHHT while it started Getzlaf's.  Teams with a GHHT went 13-5.  Nine players got their 1st career GHHT while Jarome Iginla stretched his lead among active players with his 10th.  Three times there were GHHTs on back-to-back nights.  There were none during the play-offs.

The HHOF inducted six new members in 2014.  Making the cut are players Rob Blake, Peter Forsberg, Domink Hasek, Mike Modano, coach Pat Burns and referee Bill McCreary.  On this blog, we aren't interested in debating the choices.  Instead what we are interested in is, did they ever get a Gordie Howe Hat Trick? 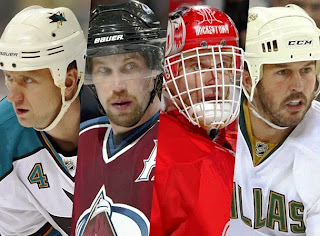 First off, since Domink Hasek is a goalie, it would have been truly remarkable for a goalie to get a Gordie Howe Hat Trick.  Same for a coach or a referee.
Mike Modano, a finalist for the Lady Byng in 2003, scored 561 goals, 813 assists and 930 pim in his career.  He had a single NHL fight.  It was against Rob Brind'Amour on October 20th, 1990. Modano had no points in that game, and thus never recorded a Gordie Howe Hat Trick.
Toughness is a characteristic that is often used when describing Peter Forsberg's game, but fighting is not.  Forsberg scored 249 goals, 636 assists and 690 pim, but only one fighting major.  His single fight, which the linsemen stopped before it began, was against Martin Lapointe in 1997.  Still no GHHTs for the class of 2014.
The last inductee to be checked for GHHTs is Rob Blake.  Blake finished his career with 240 goals, 537 assists and 1679 pim.  Blake played a physical game and had 24 fighting majors, including two during the playoffs, and yes he did GHHT.


So that's it for the class of 2014, three skater who combined for a total of two Gordie Howe Hat Tricks.
Posted by JGBlargh at 10:25 PM No comments:

Email ThisBlogThis!Share to TwitterShare to FacebookShare to Pinterest
Labels: HHOF

Did He GHHT? Mike Gartner

Of course he did.  He played in the 1980s.  Everybody who was anybody GHHTed in the 1980s, even Wayne Gretzky.  Mike Gartner had three Gordie Howe Hat Tricks in his career.  Gartner had career 18 NHL fights, 8 of them were against the Flyers.  He also racked up fighting majors against Rob Ray and Tiger Williams.

The Kansas City Scouts only played two seasons in the NHL before moving to Colorado to become the Rockies.  During those two seasons, the team accumulated three Gordie Howe Hat Tricks.  The first being by Dave Hudson, a natural trick, last period of the last game of the 1974-75 season.  In comparison, the team only had one three goal hat trick during its existence, which was by Wilf Paiement, in an epic (for Scouts fans) win versus the Montreal Canadiens.  The Scouts would finish their time in Kansas with a 16 game winless streak, then they won a game... and then they finished with a 27 game winless streak.

Posted by JGBlargh at 8:44 PM No comments: 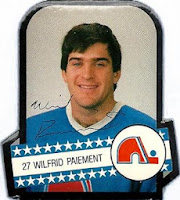 Wilf Paiement was a Gordie Howe Hat Trick machine.  Racking up 16 career Gordie Howe Hat Tricks, including one during the play-offs in 1982.  He had a GHHT with five different teams, a possible record.  His most prolific days were with the Quebec Nordiques, including five during the 1984-85 season.  In that season he had back-to-back GHHTs and also twice against Torrie Robertson.

Chris Pronger has been in the news of late, being hired by the NHL Department of Player Safety.  Pronger had a reputation as a player as being on mean SOB on the ice.  So you figure, he racked up a couple of GHHTs in his career.  Well, your figuring be wrong.  Chris Pronger has zero official career Gordie Howe Hat Tricks.  Yes, I was surprised by this as well.  He came close twice, having a goal and an assist while being involved in a line brawl.  On April 16, 1998, Pronger wrestled with Gary Galley during a line brawl, and was accessed with a roughing minor and a 10 minute misconduct.  The year before, in a play-off game versus the Detroit Red Wings, Pronger was a bit more active during a line brawl but once again never earned a fighting major.  Pronger got tied up Tomas Sandstrom at centre ice.  Check out the video below, at around 1:10 for Pronger.


Mr. Pronger, how many games suspension do you give yourself?  Here's a higher quality replay of the punch.  Over his career Pronger had 21 fighting majors, but never had a Gordie Howe Hat Trick.
Posted by JGBlargh at 1:30 PM No comments: This blog has not been updated lately.  I haven't check in a while either to see if there was another
blog or site dedicated to Gordie Howe Hat Tricks.  If there is, leave a note in the comments.
In a lockout shortened 2012-13, there were 10 GHHTs including one during the playoffs.  Four players earned their first, while Brenden Morrow notched his sixth in his career.  The league leader was Wayne Simmons who had a busy week in February, grabbing two in three games.  Brenden Dillion scored his first career goal then same game he earned his first GHHT.  Teams were 10-1 when a player had a GHHT, with the one loss being Evgeni Malkin and the Penguins in the first round of the playoffs.