Bill Guerin was one of the NHL's top power forward during his 18 year career.  He could score and he could drop the mitts. By the end of his career, he had 429 goals, 856 points and 1660 PIM.  Over his career, Guerin would rack up four Gordie Howe Hat Tricks.  He was a fight shy of getting a double Gordie in a game against the Mighty Ducks of Anahiem in 2002. 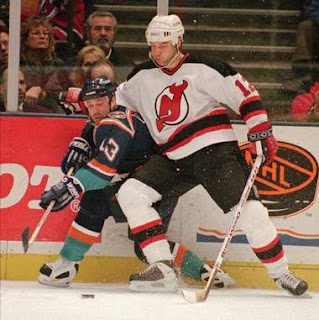 Nathan Horton grabbed his second career Gordie Howe Hat Trick.  His first came in the 2011 Play-off versus the Philadelphia Flyers.  This GHT came against the Washington Capitals on March 16th, 2013.  Horton scored the first goal of the game, collected two assists and had a scrap with Capitals tough guy, Matt Hendricks.

Posted by JGBlargh at 2:53 PM No comments: