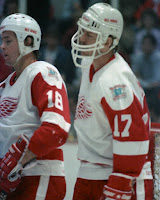 Gerald Gallant was a tough customer who was the early guardian of a young Steve Yzerman.  Gerald had four consecutive 30+ goal and 200+ PIM seasons playing alongside Yzerman in the late 1980s.  Gallant's career was stunted by back injuries, which eventually caused him to retire.  Over his career, Gallant had nine Gordie Howe Hat Tricks, including one in the 1988 play-offs.  He had three during the 1988-89 season.
Others that have researched Gordie Howe Hat Tricks have come up 10 GHHTs for Gerald Gallant.  They do not list them.  I could only come up with nine.  The game I believe they may be counting is November 25, 1987.  In that game versus the Jets, Gallant scored a goal, an assist and a roughing minor vs Doug Smail.  The website DropYourGloves.com has it listed as a fight.  While HockeyFights.com doesn't list it all.  Based on my research, there was no fighting major accessed, so technically, this is not counted as a GHHT.

Updated 5/25/2019 - I have found multiple sites that claim Gallant has 10 GHHTs.  My original research showed 9.  Since NHL has made their official boxscores available, I decided to revisit my count.  This added a GHHT (88-1-6) to his count, but also deducted a GHHT (87-2-20).  The NHL.com boxscore lists Gallant as receiving a roughing minor and not a fighting major against Donnelly.  The 3 minute difference corresponds to Gallant's total of 216 PIM in the 1986/87 season.
Posted by JGBlargh at 12:11 PM