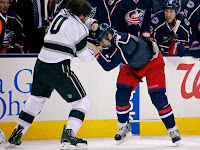 On February 5, Mike Richards collects his 3rd career Gordie Howe Hat Trick, including one during the last year's play-offs.  The Kings captain sticks up for a teammate after a Brandon Dublinsky drives Rob Scuderi into the board from behind.  Richards and Dubinsky are no strangers as this was the fifth time they had fought each other in the NHL.  Richards racked up 19 minutes of penalites on the play but was still had enough time to finish off the GHHT with a goal in the third.

Email ThisBlogThis!Share to TwitterShare to FacebookShare to Pinterest
Labels: 2012-13, Kings