The Hockey Hall of Fame announced its newest members on June 26th, 2012.  While the four players inducted are no brainers when it comes to their scoring skills, but the question on this blogger's mind is, how many Gordie Howe Hat Tricks did they get.

Pavel Bure scored 437 careers goals in a career shortened by knee injuries.  A man with incredible hands and blistering speed, Bure is not known for playing rough.  Bure scoring a goal?  No problem.  An assist?  Not as likely as a goal, but still, no problem.  Bure getting into a fight?  Problem.  Pavel Bure was never accessed a five minute major for fighting in his career.  The closest Bure ever came was on December 18th, 1992 during a line brawl against the San Jose Sharks.  He did rack up 4 assists that night, but no goals.

Adam Oates led the league in assists three times, including back-to-back seasons while on the cusp of age 40.  Oates played set-up man to some of the leagues top snipers, Hull, Shanahan, Neely, and Bondra.  Oates was one of the best playmakers of the 1990s.  Oates came into the league in the 1985-86 season and had all of his career fighting majors, 2, in the 1986-87 season.  1987-88 is the first season I can access to boxscores, so I can't check to see if Oates also had a goal and an assist in those two games.  In 86-87 Oates scored 15 goals and 32 assists.  So the data for Oates is inconclusive.  *Update*  I have reviewed the boxscores of 1986-87, and Oates did not get a GHHT. 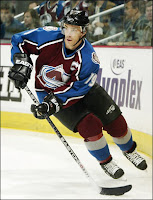 Joe Sakic was considered, by most, to be a sure bet on the 2012 ballot, his first year of HHOF eligibility.  Ranked 9th on the career points list, Sakic consistently put up star numbers throughout his career.  Sakic's trophy case is well stocked, as he won two Stanley Cups, a Conn Smythe, a Lady Byng and a Hart trophy.  Gentleman Joe is considered one of the classiest players from his generation.  On March 20th, 1999, Sakic got 2/3rds of the Gordie Howe Hat Trick on one play, scoring a goal and winning by decision against Doug Gilmour.  Sakic would pot another goal in the game but would not collect an assist.  That was the closest Sakic got to a GHT.

Mats Sundin Is the only player inducted from the 2012 HHOF class that had over 100 PIM in a single season.  He had 103 in 1991-92.  While statistically, Sundin had his best seasons during his brief career as a Quebec Nordique, his consistency with the Leafs made him HHOF worthy, albeit debatable.  With the exception of the lock-out season of 1994-95, Sundin scored 70+ points in every NHL season other than his first and last.  While Sundin was a large player, 6-5, 230lbs, he was not a physical player.  He had two career fight, but no Gordie Howe Hat Tricks.

The Gordie Howe Hat Trick total for the 2012 class is zero official GHT, and two incomplete due to insufficient data.  For fans of the GHT, the big story was who was left off the ballot, Brendan Shanahan, 17 career GHTs, Eric Lindros, 6, and Jeremy Roenick, 5.  Add those three to the new group of first year elgible players in 2013, Chelios, 2+, Tkachuk, 10,and there's a good chance the 2013 HHOF group will help represent the Gordie Howe Hat Trick.
Posted by JGBlargh at 4:27 PM

Email ThisBlogThis!Share to TwitterShare to FacebookShare to Pinterest
Labels: HHOF